This site uses cookies for analytics. By continuing to browse this site, you agree to this use.

Azure Web Apps allows developers to have different environments or slots for the same website (learn more here). Slots are useful if you want to test things right before going into production in an environment similar to it (they could be virtually identical).

In the case of webhint.io we have 2 slots or environments and the process of changing the code from one place to another is done via a custom Travis CI script.

The TL;DR; version is:

This guide documents how to deploy your website into an Azure Web App slot, test it using webhint, and put it into production. All of this using Travis CI. It assumes the user has a Travis CI and an Azure account, this last one with an Azure Web App already created.

Create and configure a staging slot in your Azure Web App

To create a slot in your website you have to: 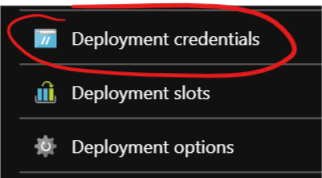 Create and configure a service principal

This is an optional step, but recommended. You should create a service principal with only access to the bare minimum. That way you do not have to put your credentials anywhere (even if they are encrypted), and if something happens you can easily revoke access to it.

Add and configure webhint in your project

First thing you have to do is add webhint to your project:

Then you need a valid .hintrc file. For a starter file, use the following command and answer the questions:

You can use the generated file as a starter point for your needs, ignoring URLs you do not have control over, tweaking the configuration of some of the hints, etc.

Finally, add a task to your package.json that will test the staging environment:

The last remaining piece is Travis CI. As stated earlier, Travis CI is in charge of deploying, running the tests, and changing the code from staging to production. And all of this from the .travis.yml of your project!

Travis has several steps and you can configure what scripts or actions execute in each one. E.g.: before_install, before_deploy, deploy, etc. To know more about the different steps, visit Travis CI’s Build Lifecycle.

One thing to consider is that not all the scripts can break the build on Travis. If you want to stop the process if webhint fails, you will have to combine a few steps into one. There are more details further on, but you can learn more in Travis CI’s Breaking the Build.

Deploy the code into staging

The staging slot should have a local Git repository. Every time there is push event in this repository, Azure will trigger the installation process (basically download the code and then execute npm install).

There are 2 ways to get the code into staging in Travis CI:

Travis CI has built-in support to deploy to Azure. To enable it you have to configure the following environment variables:

With the values above, Travis CI will deploy the code to https://mysite-staging.azurewebsites.net.

It is recommended to encrypt these environment variables for security reasons.

How to encrypt environment variables:

Now that you have added the credentials to deploy to Azure you can deploy to it:

One thing to keep in mind, is that .gitignore will be respected at this moment. If you have artifacts from a build step that need to be published and your .gitignore ignores them, you will have to update it before this stage.

An easy way to do this is to have a “production” .gitignore and replace one with the other in the before_deploy:

Another thing to consider is that Travis CI resets the working directory before deploying. If your deployment relies on a build step, you probably want to change that:

The next step is to test using webhint. You should have test:staging in your package.json. Use it in the after_deploy stage:

NOTE: As mentioned previously, non-zero exit codes for stages after script do not change the status of the build.

Manually deploy to Azure from Travis

There are a few limitations when running the (before_|after_)deploy stages:

To solve these issues, you should collapse the different stage scripts into the script stage. In the case of webhint.io, it looks as follows:

You will still have to add some encrypted environment variables to make everything work.

Congratulations, you can now deploy to your Azure WebApp from Travis!

Test and swap into production

If you have followed the instructions, you should have a test:staging task in your package.json. Now it is time to use it:

Update your .travis.yml to run it after the deploy:

You also want to swap if everything goes right. To do this, the first step is to install the Azure CLI in Travis CI. The following snippet of .travis.yml assumes the machine runs Linux:

Then you need to log into Azure using the Service Principal credentials from before and do the swap. It’s probably easier to have a script file that does everything and call it from the after_script stage or any other you might be using:

NOTE: You have to replace the values RESOURCEGROUP, SITE and SLOTENAME with yours. Also, you will have to create the encrypted environment variables for them similarly to what was described before:

Please refer to the Azure CLI documentation for other authentication methods.

If the above is under .travis/swap.sh, then your .travis.yml should have something similar to:

NOTE: Remember that all stages after script will not change the build status, nor will they interrupt the execution, so you might want to move the actions to another stage depending on your needs.

NOTE: This will not change the status of your build if webhint fails in staging. To achieve that you will have to combine all the stages after script into script (webhint.io’s .travis.yml does that).